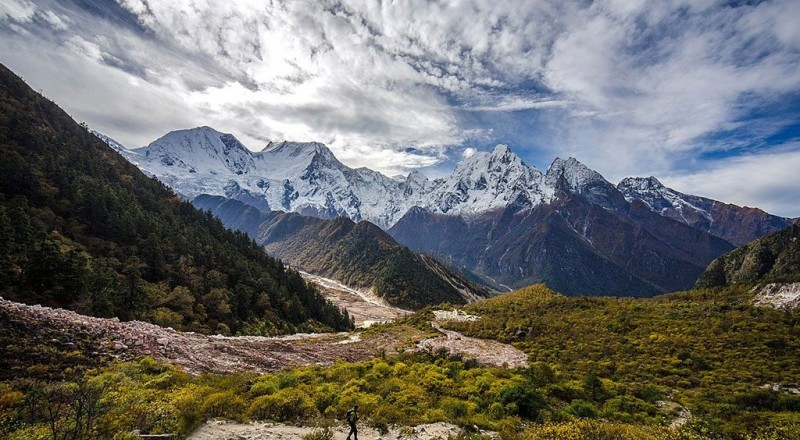 If you’re looking for the trail that is lesser-known, less crowded yet equally serene to every other trek in Nepal, Manaslu Circuit Trek can be your new trekking destination. Opened for tourists only in 1992, this circuit carries immense tourism prospects. Nepal has eight mountains over the height of 8,000 m and Manaslu (8,163m) is one of them and also the eighth highest peak in the world.

Manaslu Circuit, located in Manaslu Conservation Area is home to 33 species of mammals, 110 species of birds, 211 species of butterflies, 2,000 species of flowering plants and 11 types of forest. So as you exchange the glances with the all-gracious mountains, you can enjoy sight-seeing rare flora and fauna of temperate as well as an alpine zone.

Besides enjoying the serenity of nature, the walk has a lot of cultural blessings to offer. As we proceed into the circuit, we proceed through ample Prayer wheels, mane walls, Gumbas, etc. The Tsum valley is a hidden gem situated in the region that practices ancient Buddhism. It is a fortune to witness such ancient culture and Manaslu Circuit Trek will bestow you this opportunity.

If you’re fond of trekking and yet want the place to be only mild strenuous, this can be your perfect preference. Although the trek might last up to 2 weeks, the trails do not require too much exertion. And even if altitude sickness can be a problem, proper acclimatization will downplay.

Besides cultural offerings, the circuit is adorned with history. The Tsum valley boasts intact ancient culture and monks have meditated here to find peace. The valley has not been affected by the hustling human nature and rapid growing of concrete forest. So the circuit can be a perfect escape route to tranquility, parallel universe to this erratic one, solace to your restlessness.

At the end of the day, traveling is all about bragging among friends, isn’t it? The circuit trek provides you immense moments to share. You’re as high as 5,106 meters and you can’t wait to tell your friends, which will be when you’ve ascended Larke Pass, highest point of the circuit.

With what you’ve seen here and what you share with your friends and family, your social life can’t wait to get flooded with likes and hearts. So, if you’re looking for an affordable trek to gather lifetime memories, this impeccable trail can equip you with millions.

With the advent of spring comes the season of travelers. The flowers of spring ablaze the forest and the mammals enjoy their breeding season amid the beauty the spring brings. As per the Nepal Tourism Stats prepared by the Ministry of Culture, Tourism and Civil Aviation, 4780 tourists have visited the Manaslu Circuit in 2016 while the numbers climbed up to 5745 by 2017, which is a 20% growth of visitors. The same data suggests that March-April accounted for 194882 tourists out of 940218 within the year 2017, which is 20.72% of total tourists (only October-November accounts more flow of tourists, 22.56%, than March-April).

On the lap of mountains like Manaslu, Ganesh, and Shringri bloom the beauty of Rhododendron, laminating the hills with its red velvet during spring. Fir and spruce are commonly found in temperate regions. Grasslands are filled with colorful flowers like Geum, Iris, Wild Petunia, Anise, Sedum, etc.

As one ascends to a greater height, only herbs are seen. The region is ore to medicinal herbs like Jatamasi, Bojo, Panch Aunle, Sapragandha, etc. On the lower region of the trail, we can see animals like golden jackals, blue sheep, and barking deer. Pheasants like Himalayan Munal, Kalij, and Blood pheasants are abundantly seen. Himalayan black bear, if spotted, can be a thing to brag about.
When we are walking the trails, listening to the birds chirping and jackals howling, Golden Eagles and Himalayan Griffons will be keeping an eye from high above. The rare flora and fauna find soothing shades in the lap of mountains viz. Manaslu (8163m), Himalchuli (7893m), Mt. Ngadi (7871m) and Mt. Ganesh (7422m).

For what your eyes see, these eye-catching mountains won’t let you doze a little but if you’re planning on climbing mighty Manaslu, it comes 4th in terms of fatality. However, the heights of Larke peak, Cheo peak and Samdo peak are achievable with extra permits from the Nepal Mountaineering Association (NMA) and mountaineers are advised to go with gears and equipment. Kaal lake and Birendra lake located in the area will provide you staggering views to replenish aura in life.

Manaslu region has abounding cultural offerings. As in the lower region, villages are dominated by the Newar community and Newari cultures and traditions can be observed throughout the year. Magar and Gurungs make a majority of portions in the hilly region and celebrate Lhosar.

As we ascend, Tibetans are the inhabitants and their respective festivals are observed. Horse riding festival is one of the important festivals and is observed during mid- April. Prior to the horse-riding festival, an archery competition is completed. The archery is accompanied by Chyang, a local beer. Chyang is believed to add the performance of the archers but with a lot of alcohol, disputes are bound to happen which is solved by the senior of the village.

Dumji is another important festival celebrated with a lot of dancing and singing, generally during May to mark the birthday of Guru Padmasambhava. Besides, there are annual gatherings at religious places of Nubri, Kutang, and Tsum like Kalmachum Lake and Pungeon Gompa during April.

Apart from these, every village and monasteries have their individual cultural practices worshipping their deity. In a nutshell, March-April is an ideal month to visit the region from a cultural perspective too.

The temperature in the temperate zone during March-April is neither too hot nor too cold. However, the temperature in the alpine region remains relatively low throughout the year. The spring doesn’t see much of the rain but sudden afternoon showers can be witnessed during these months. This time of year is generally dry so that a clear panorama of mountains is vivid as crystals.

The clouds are formed by evaporating the snow from mountains which may obstruct a clear view of mountains during the daytime. The morning view of mountains, however, is as elegant as watching your crush. The sky is clear at night too and Nau Lakha Tara makes a blanket of stars one would love to lie and stare for hours.

The sun is not too scorching either which makes the March- April a perfect time to trek. There is a very less chance of icefall and snow during these months. As the monsoon arrives during June, the chances of hailstorm increase in temperate zone whereas there might be snow in the alpine region of the circuit. The wind speed is well below 3m/s in the spring, causing no problems to the trekkers.

Manaslu circuit is a lesser trekked region. So the services might scarce when compared to other regions. However, trekkers don’t have to taint themselves with sleeping bags, tents and food as there must be apt hotels for trekkers to suffice.

Trekkers have to get to Arughat by bus at first and a bus from Arughat will reach up to Soti Khola from where the trek will begin. Transportation will be accessible up to Arughat easily. However, the bus leaving for Soti Khola might not be as comfortable as the bus up to Arughat.

The circuit treks after Soti Khola. The density of guest-house decreases as the altitude increases. There must be no problem finding hotels in the temperate region but upon ascending this might be a problem during March-April as this place has attracted a lot of customers recently. If someone's been to the circuit prior, one can always ask for contact numbers.

Carrying sleeping bags can be fruitful in case the hotels are out of rooms. Since you might have to ascend up to above 5000 meters, altitude sickness can be a problem. Homemade remedies like eating garlic or sugar can help to prevent altitude sickness but one can always rely on medicines from the drug store. You should be prepared for some health problems like nausea, diarrhea, cuts and wounds and medicines should be packed accordingly. First aid is a must along with some painkillers and electrolytes.

When you’ve almost walked 5 hours after getting off the bus, you’ll reach Macha Khola walking along the Budi Gandaki river. The very famous step cliff falls on the way to the village. However, the trails have been expanded with the flow of tourists increasing every year. Maccha Khola is a place with ample hotels to stay in. The cool breeze when walking along the river embarks the trail with an enthusiasm.

Upon walking for two days Bihi Phedi is reached. Bihi is a camping site and mani walls make avenue to the village. Chhetenpok gompa, a newly constructed gompa is a major attraction here as villagers from the nearby village come here to pray.

Lho is the next stop which is a beautiful village in the lap of mountains. At a height of 3140 meters, a clear view of Manaslu along with the mountain range is vivid under a clear blue sky. The village has comfortable guest houses. A monastery is located to the north of the village where one can light butter candles and make donations to the monastery.

The Manaslu Trek is a beautiful and marvelous trekking experience as it rewards the trekkers with an amazing experience of a lifetime. If you are equipped with the right gear and preparation, this trek can be done at any time of the month.