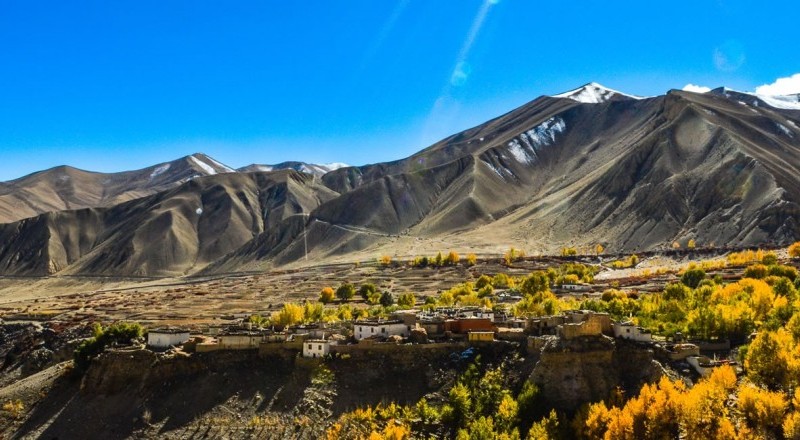 Trekking expeditions in Nepal is a beautiful and unforgettable adventure. Trekking in Nepal is quite popular in the world for its breathtaking natural beauty and prosperous cultural diversity. With some of the most diverse range of treks including short day hikes to month-long treks in the mountain regions, Nepal can fulfill any trekkers’ dreams and requirements.
Famous for being home to the tallest peak in the world Mt Everest, Nepal’s multicultural aspect also helps in making the trek more absolute and richer in diversified culture. Since Nepal is amusing in culture, history and natural landscape, it can be considered as one of the ideal places for trekking. Trekking in diverse terrain will offer you some of the best memories along with the ethnic and cultural celebration of the Nepalese.
Trek to Mustang is becoming the most popular choices for a lot of national as well as international trekkers. A trek to Mustang encompasses everything that a trekker looks for- from exquisite views of some of the highest mountains in the world,to experience a diverse civilization, and landscape. Another reason is its’ accessibility. It is possible to do this trek easily throughout the year, including off-seasons like the summer season of Nepal.
Mustang is one of the remote and sparsely populated regions of Nepal. The mustang is geographically divided into two parts- Upper and Lower Mustang. The Upper Mustang is a high altitude desert with ocher land and home to gorges and canyons. The lower Mustang, on the other hand, is a remote region famous for its apple orchards, rhododendron forests and the holy Hindu temple, Muktinath.

Muktinath is a sacred place for the Pilgrims of both  Hindus and Buddhists religion. Thousands of Hindu devotees from Nepal and India visit Muktinath monument every year. It is said the bathing in the waters from 108 cow’s head plugs here guarantees salvation after death. It is also famous for its cold times, Vishnu temple, ancient fossils, and Jwalamai (Goddess of Fire) Temple and natural gas jets that provides Muktinath's famous undying flame.
It is an interesting annual three-day festival that consists of Tibetan rituals and there are different myths on why it is celebrated. There is a fairytale of a son who had to save the Mustang kingdom from destruction. Similarly, the victory of one of Buddha’s incarnations over a demon that lived on human beings that tried to destroy the world with tempest and the drought. Anyway, the sole purpose of observing this commemoration is to pray for peace in the region and in the world.
Mysterious Sky Caves in Mustang is an assemblage of some 10,000 man-made caves dug into the sides of valleys. The caves lie on the steep valley barrier near the Kali Gandaki River. There are plentiful artifacts belonging like sculptures, Buddhist paintings and scripts inside the cave, making it one of the world’s greatest archaeological mysteries.

Lo Manthang is the capital of Kingdom of Lo (Mustang), the town sparkling in the barren landscape.

Yes, unlike some of the most famous trekking destination in the Annapurna and Everest region of Nepal, a trek to this region can be comfortably and successfully done even in summer or monsoon season of Nepal. Mustang lies in the rain-shadow region  of the Annapurna range, meaning this region of the country sees small amount rainfall making it perfect for trekkers who visit Nepal during this season.
Like all the places in Nepal, Mustang encounters four kinds of weather in a year. They are Spring, Summer, Autumn, and Winter. It is very crucial that you research the weather of a place before visiting it. This way you can make your trip a successful one without much problem.
However, if you still are not sure and want to know the best time to trek to Nepal or more precisely, Mustang, here is more information on the best time to visit Mustang, Nepal.

Spring season is by far the most beautiful season to visit Nepal. The month of March, April and May is considered spring season and it’s the best time to visit Mustang.
As the temperature rises, the rhododendron blooms making Mustang an ideal scenic destination for great pictures and memories of forests covered in red and pink flowers. Since the weather is warm and clear, the peaks and landscapes are perceptible.
The spring season is also the time when the Tiji festival is celebrated at Lo-Manthang. You can witness the local culture to its full glory as the local people are decked in their finest clothes and jewelry and observe the festivals with songs, prayers, drama, and dance. During this festival, the cultural dances are performed by the monks with a mythical story at Chode monastery. The
Many pilgrims from all around the world pay a visit to Mustang during this time to attend this festival. You can be a part of this festival and experience their culture and traditions firsthand. Spring is the time of the year where new plants grow and flowers bloom. You will surround yourself with the immense charm of nature as you trek to Mustang. The temperature of Mustang ranges from 16-20 degrees during this time which is neither too cold nor too hot for trekking.
Spring season is thus great for visiting the Mustang to witness its blend of cultural enjoyment along with the majestic views of the mountain peaks and rhododendron forests.

Summer in the country usually starts with heavy rainfall, but since the Mustang region lies to the north of the Himalayas and is a rain shadow area there is no monsoon in this region. This salient feature of Mustang makes it a perfect place to explore during summer.
Summer is one of the most favorable schedule of the year for Upper Mustang trek. The days are longer and the sky cleared. The temperature of Mustang is mild during summer which ranges from 13- 20 degrees; perfect for trekking. Mustang boasts amazing clear views during summer, this is uncommon in many parts of Nepal. You can also see the vegetation of the Himalayan arid plateau.
Despite the four-seasons accessibility, you need to take into consideration that the transportation for getting to Mustang might give you some problems. Because the trip to Mustang starts via Pokhara. And Pokhara gets a maximum amount of rain during summer. You need to travel with 2-3 buffer day for flight delays or cancellation.

Autumn is by far the best time to visit Mustang. After monsoons’ rain, the temperature during this time is cool with clean skies and fresh air. The weather becomes parched offering great visibility making way for great trekking condition. During this time, you can trek easily and comfortably.
September still sees light rainfalls and humid atmospheric condition in the lower regions. As December is just around the corner, autumn is on the cooler side. It is refreshing and often considered the best month to trek in Nepal. The month of October and November experiences somewhat more predictable weather with great visibility of the mountain peaks, landscapes. You do not need any special gear and equipment to trek during these months.
These months are also great to catch a glimpse of animals and birds of the region. Since the weather is stable, you will enjoy the spectacular view of Mt.Annapurna, Mt.Dhaulagiri, Mt.Nilgiri, and other peaks along the paths. These months are also great to see animals and birds of the region.
However, during this period you need to stay aware that the trail remains crowded with trekkers. As such you are likely to face difficulties regarding room and flight tickets. Thus, if you are planning to travel during this peak time, it is important to pre-book accommodation and flight.

December characters the beginning of the winter season in Nepal. The temperature starts to drop during the months of the January and February, especially in the late evenings and night.

Winter in Mustang is the coldest among all the seasons. Because of this, many trekkers prefer summer, spring, and Autumn over winter for Mustang trekking. The temperature of the Upper Mustang decreases to minus during winter in Mustang. However, you will be rewarded with superb panoramas and the trekking trails will be a lot quieter catering to fewer visitors.

The trekking trails are covered with snow at the time of winter. Many people of Mustang descend to a lower altitude during this season because of extreme cold. As the temperature drops to minus in the upper mustang, the villagers migrate to lower regions which causes a shortage of homestays. But, some lodges and tea houses are open for business during early December.
If you are someone whole loves isolation as well as love challenging treks, you should definitely trek to Mustang during the winter season. But it definitely takes preparations and appropriate gear.
Therefore, Mustang is one of the most beautiful places to visit in Nepal which will provide you with natural beauty and a lifetime of memoirs. You can choose any time of the year to visit Mustang as its exquisiteness remains the same in every season. But, in the case of trekking, you may have to think about the best time of the year for trekking to Mustang.
Autumn and spring are one of the preferred seasons for Mustang trekking. If you are an experienced trekker, you will not have problems trekking in any season. It would be better if you take some physical training before trekking to Upper Mustang, especially if you are a beginner.
I hope you enjoy your visit to mustang!