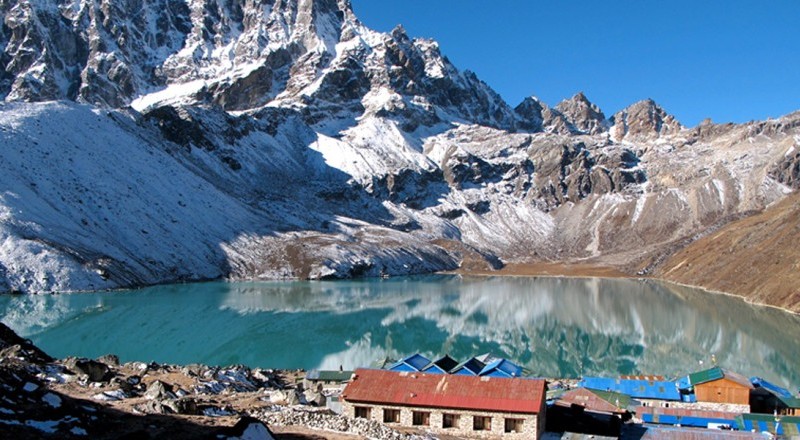 Everest Base Camp Trek VS Gokyo Lake Trek With Everest

It is a dream of many trekkers to hike up through the clouds to the base camp of the world’s tallest mountain. The trek will help you experience the scenic view of the Everest like never before. Nested in the valley of the Khumbu region, this trek will bring you an immense treasure of the winding path between forgotten valleys, snaking around tranquil lakes and traditional village.

The two most common trekking routes in the Everest region are the Everest Base camp trek and the Gokyo Lake Trek. Here are a few facts about both the trek that will make you easier to decide which trek is the one for you.
The first and foremost reason is definitely the charm of Mt. Everest and the moment of being there at the lap of the roof of the world. The voyage to Everest base camp is an exploration and adventure for your lifetime.
The trek generally takes two weeks to complete but this totally depends upon the route one follows. Arriving at the Lukla airport and commencing the journey shall not take more than two weeks. However, depending upon the route, the trek might take as long as a month to complete it. Apart from arriving via plane, other options could be trekking through the trails of Jiri to arrive at Namche. Another option could be walking through the snowy trails of Rolwaling valley.
On the other hand, Offering a visit to the second largest glacier in the world, the Gokyo lake trek provides some tremendous high altitude trekking with spectacular mountain views including the highest peak of the world, Mount Everest. With the opportunities for outstanding photographic views, this trek remains a total mountain adventure journey to Everest.
Just imagine a lake with a village on one of its sides and a big brown hill on the other with a gorgeous background of giant white peaks. Exciting, isn’t it? The feeling you get on this expedition is way beyond explainable; you are happy, excited and thrilled, as you stand at the lake in such a chilling atmosphere with the cold wind hitting your face. The imagination of one being at the mountain lake sounds so exciting that anyone would want to experience the beauty of the Gokyo Lakes!

Highlights of Everest Base Camp Trek

Initiation of the EBC trek

As mentioned earlier, the EBC trek is commenced via the flight from Kathmandu to Lukla. Known to be a little adventure itself, the flight to Lukla is sure to stay in the minds of all those who do it, as the flight offers a spectacular view of splendid mountains.
The Lukla Airport situated atop a cliff is something fascinating to watch, The view from the flight presents beautiful sceneries of the change in topography as we enter into the Himalayan foothills.

The Sagarmatha National Park is the major highlight of the EBC trek. The national park covering an area of 1148 square kilometers is preserved along the trail to EBC with steep terrains. The national park is mostly covered with pine and rhododendron forest where we can encounter varieties of endangered wildlife such as Himalayan Monal, Musk Deer and mountain goat.

The winding landscape of the park shelters to many endangered species of animals and many other creatures. The birch and bamboo forest of the park provide tranquility to this Himalayan surrounding to trek through. The beautiful scenery that the park protects depicts a magnificent journey that adds more worth to this trekking adventure.

Namche Bazaar is a popular mountain town which provides a gorgeous view of the mountain peaks like the Kongdi Ri, the Thamserku and of course the roof of the world, Mount Everest. The town is quite famous for being trekker’s hub, and it’s amazing atmosphere provides an outer-worldly aura of Himalayan peacefulness.
As the trek begins from Namche Bazaar, it is the place where most trekkers stay for acclimatization. It is a beautiful destination that plays important role in the growth of the tourism sector of the Khumbu region.

The Khumbu region of Nepal is an excessively condensed Sherpa haven. The legendary Sherpa culture of Everest is a subject of much awe and inspiration for most people around the world. As such, the Everest Base Camp Trek introduces a perfect opportunity to enjoy the legendary culture and tradition of the Sherpa people nearby.

Sherpa people are known worldwide for their extraordinary mountaineering skills. They are welcoming and friendly people adding a touch of exoticness to the trekking journey. Most trekkers usually have a Sherpa guide or helper while exploring the region.

Tengboche is the terminus site of the “The Sacred Sites Trail Project” of the Sagarmatha National Park which attracts a large number of enthusiastic persons exploring trekking and mountaineering.

It is a circular trail that covers about 10 monasteries in a clockwise direction before terminating at the Tengboche Monastery. All the trekkers and climbers go to the monastery to pray and seek to get blessings from the Buddhist monks before proceeding further up.

Kalapathar is a peak standing at an elevation of 5545m and it is the best place for a 360-degree view of the Everest Himalaya range. This is the place where you will witness the best view of Mount Everest as well. In addition, it does not require any climbing gear and skill to climb it.

Budget-Friendly Trip: One of the best reasons to make this trip to the Everest region is that it is quite economical and would certainly be fun to do. AS there is so much to explore in the Gokyo region with a stunning view of the Everest region and a wide variety of beautiful scenery on an affordable price range this trip is the best.

While both treks reach an elevation of 5,545 m at the peak of Kala Patthar, Everest Base Camp plus Gokyo Lakes can be a bit more difficult. Not only is it a slightly longer hike, but the Cho La pass, a glistening ice trail, can be quite a challenge. Gokyo Lake Trek can’t even be made during certain times as the pass is actually closed during the winter months due to snowflakes.
Fortunately, having already visited EBC, you should be getting used to trekking at high altitude and feeling stronger as you cross the pass. If the weather is at all bad microspikes can be helpful. Both treks have their moments of difficulty due to terrain or steep inclines, but the hiking to Gokyo Lakes is well worth the extra time and effort if you’re up to the challenge.
The nice thing about a trek through the Himalayas is how customizable they can be. It’s your dream trek, so why shouldn’t you be able to make it your own? Most people visit Gokyo Lakes as a side trip on the way to EBC. However, you can also visit Gokyo Lakes making it a stand-alone trip or even add it onto another trek.