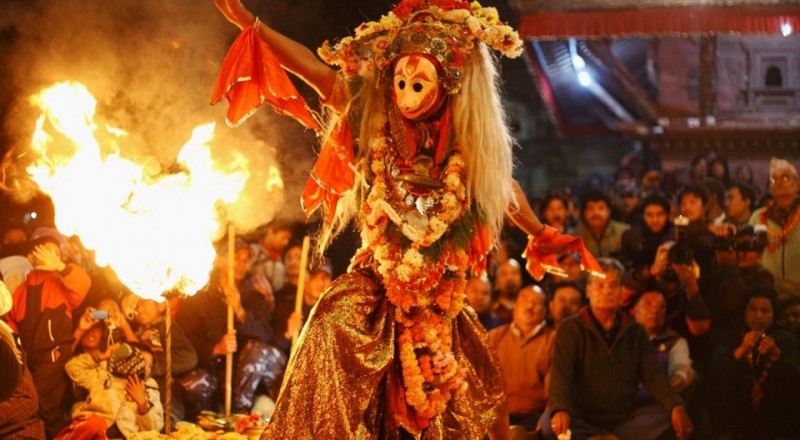 Nepal is a country famous for its colorful culture of diverse ethnic groups with distinct art, culture, and tradition. Festivals and diversified culture are the prominent aspects of Nepali society and every Nepali owns culture and celebrates various festivals all year with their unique rituals.

Rich in music, dance, arts and literature, the culture of Nepal is unique. The miscellaneous caste found in Nepal has developed into their unique religion, language, and music. An eminent factor in the everyday life of a Nepali is a religion where the culture of different religions together to form a national identity.

People of assorted religion and beliefs dominate the Nepali society. Hinduism, Buddhism, Islam, and Christianity are the major religions that are practiced in Nepal. Even though the country involves people living in diversity, people have a sense of unity.

The Brahmin and Chhetri ethnic group who cover the maximum population in Nepal are regarded as Hindu believers and the people from the Mongoloid community are taken to be Buddhist worshippers. Although divided by cultural beliefs, the two major religions (Buddhism and Hinduism), they have coexisted in peace through centuries.

Being home to diverse settlements in terms of ethnicity, religion, and culture, Nepal is regarded as a culturally rich country

Nepal is home to many existing and dead languages. Being known as a colorful garden of 4 castes and 36 sub-castes, there are 123 different languages prevalent in Nepal. Nepali, the national language of Nepal is a primary tongue understood by every Nepali all over the country.

Being a multilingual country, there are over a hundred mother tongue as languages of Nepal. This multilingual status of the country has made it possible to secure a place on the linguistic map of the world and Nepal has been established as a fascinating area for linguistic study.

The relation between language and culture is profoundly rooted as this is how human values are shared.

The culture in Nepal is a collective form of music, religion, literature, and architecture. Monasteries and Temples are an integral part of Nepali architecture.  Blessed with one of the richest cultures from around the world, the culture in Nepal has now been the way of life. Taking culture as a way of life may sound weird but it holds true in the case of Nepal as every facet of life, food, clothing, and even occupations are culturally directed.

Nepalese mostly Hindu do not eat beef as the cow is considered as a universal mother that symbolizes motherhood, charity, and love. Every caste follows the different cultures and hence is bound to worship different gods. Before entering a temple or a house, one is asked to take their shoes off as not to pollute pure interiors.

In the Hindu culture, some temples are even forbidden to non-Hindus. The right hand is considered pure and is used to eat, pay, give and receive. People using the left hand on religious lineups are considered to bring bad luck and are avoided.
Nepalese culture could be seen well reflected in the food they eat. Nepal does not have a distinct cooking style as the food habits differ in different landscapes. The cooking in Nepal is highly influenced by Indian and Tibetan style cooking.

However, the authentic Nepali taste could be found in Newari and Thakali cuisines.

The regular Nepali meal is Dal(lentils, peas, and beans), Bhat (boiled rice) and Tarkari(curried vegetables) accompanied by Achar(spicy pickle). Acquired from the Tibetians, Momos(steamed dumplings) deserve a mention as one of the most popular snacks among Nepalis with being said that “ you are not a Nepali if you don't like momos”. Rotis(flatbread) and Dhido(boiled flours) along with Gundruk (fermented green vegetable) also make meals in some homes, especially in rural areas.

Apart from these dishes, there are still innumerable varieties of eatery that you could. Therefore on your visit to Nepal, try and explore the hidden secrets of food into the cultural settlements all over the country.

The unique culture and tradition in Nepal have been the major attraction for visitors for centuries. The traditions are originated from ancient religious origins where are some are only specific to only one ethnic community. Here in this section, we have showcased to you some of the interesting and unique traditions in Nepal that relate to major life events such as birth, adolescence, marriage, old age, and death.

Nwaran in a Hindu community is a child naming ceremony celebrated on the 11th day of birth of the child. During Nuwaran, the astrologer determines an auspicious starting letter for the child's birth name according to the date and time of the childbirth. The birth name of the child often known as the “Nwaran ko Naam” is necessary for rituals and pujas and is not a name by which the child is called on a day-to-day basis.

Pasni is a second ceremony celebrated in the life of any Hindu Person. Pasni usually takes place when the child turns 6 months and is a ceremony for feeding rice pudding to the child for the first time. Pasni is a milestone signifying the growth of the infant to its next life stage.

Pasni is also known as Annaprashan which is a Sanskrit term literally meaning “ grain initiation “.  The weaning ceremony, Pasni though being a centuries-old tradition, modern science has established a fact that that child’s digestive system becomes capable of processing solid food as the child turns 6 months.

Bratabandha is another ceremony in Hindu tradition signifying the transition of a boy into Manhood. Bratabandha is considered to be an important ritual in any man’s life as he is not legit to marry until he has performed Bratabandha. The boy’s head is shaved and various rituals are performed to transition the boy towards manhood.

An enchanted thread is given to the boy and is looped over his shoulder, signifying that he is now a man. The rituals performed during Bratabandha varies in different communities. Among the Hindu people, the Bratabandha represents the banishment of the boy as in Lord Ram’s exile whereas in the Buddhist community it represents the abandonment of worldly pleasures by the boy and his transition to a monk symbolizes Lord Budhha’s retreat from royal pleasures.

In the Hindu community, there is a belief that marriages are made in Heaven. Once a person becomes at the age of marriage, the parents look for the groom or bride through their relatives. There are several middlemen or “Lami” who help in looking for the match.

Once the groom and the bride finalized, the parents consult a priest to check if the bride and the groom are perfect to get married. The date for performing this auspicious ritual is confirmed. The family of the groom arrives at the bride’s house and the ceremony is initiated.

The Swayamvar follows where the bride and the groom exchange their rings and a garland made of doobo ( Doobo is a green grass never dries, indicating that the relation between the husband and wife will never break or dry out).

The marriage in Nepalese society involves a ritual called Kanyadan where the bride’s parents handle the responsibility of their daughter to the groom. The kanyadan is no doubt the most emotional part of the marriage. The groom then puts “sindoor and Pote”  to the bride. At last, the laughter slowly fades as the bride leaves her maternal house and goes along with her husband.

Chaurasi is Nepali for 84 and is ceremonial worship conducted during the age of 84. As the puja is performed, the person is considered similar to God. The Chaurasi Puja is considered a unique tradition and the person holds a position next to god and is now free from any social.

The ceremony is performed for around three days where the main function takes place on the last day.  The first day is marked by performing a “nanyamukho Sarad” and is conducted to please the dead ancestors called Pitri. The second day is marked by a Rudri puja chanted by different priests. On the third day, the main puja is performed where 84 mud pots are prepared to worship. Along with that, a cow is gifted to the priest as Gaudaan. On the puja, the elderly person celebrating the chaurasi Pooja gets to put tika and celebrate.

Diversified Language, Culture, and tradition makes Nepal a country of great cultures and ethical diversities. The multidimensional heritages in Nepal encompass the diversity of ethnic and social groups making the country pleasant with multi-ethnic culture and traditions.