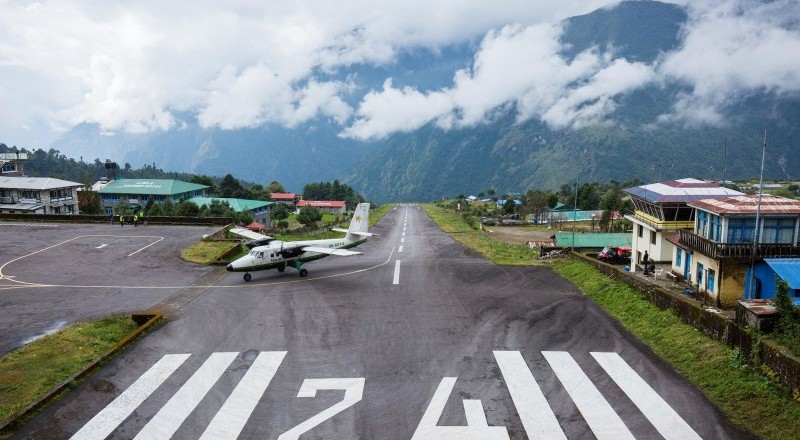 The world's most dangerous airport in Nepal: Lukla

Whenever someone’s talking about the most dangerous airports in the world, the talk of Tenzing-Hillary Airport is inevitable. With the extreme land topography, Tenzing-Hillary Airport A.K.A Lukla airport holds undoubtedly the highest place in the books of most dangerous airports from all over the globe and there are many facts and documentaries to support this fact as well.

Lukla is located in the Khumbu region of the Solukhumbu district. The airport is where the trek to Everest is commenced. Back in 2010, The History Channel broadcasted a program called Extreme Airports which ranked Lukla on the top. Running under the government of Nepal, this airport is situated at an altitude of 2845 meters which is one of the airports situated at the highest elevation.  The flights to Lukla airport leave from Kathmandu daily except for the days with adverse climatic conditions. Lukla airport is almost 30 minutes flight from Tribhuvan International Airport, Kathmandu.

Despite this short flight time, the flight minutes are ecstatic as you fly over the lush mountains. But the region sees rainfall very commonly so even if it is a bright sunny day at Kathmandu, you might find a little rain while arriving at the airport. As you step outside the airport at Lukla, the cold mountain winds will give you a chilling sensation. There are high winds, clouds covering the runway and change of visibility which often delays the flight. While viewing from the cockpit at the time of landing, the view gives you an adrenaline rush for sure as the airport is situated in a very dangerous location.

After sir Edmund Hillary and Tenzing Norge Sherpa successfully summited the world’s tallest peak, sir Edmund Hillary found the urge to build an airport in the region. So this airport was made under his supervision which was initially intended to be built in plain farmland. However, the local farmers would not concur with the idea of destroying their bred-winner. So Hillary bought the land from local Sherpas and build the airport where it currently stands. It was 2001 when the runway was paved and before that, local Sherpas would dance over the runway to make the soil firm. The airport was named Tenzing-Hillary airport later in 2008 in their honor.

Even though the Everest region sees a lot of tourists all year long, the airport is relatively small. The runway is accessible to helicopters and small aircraft like Twin Otter, Dornier, Turbolet and Pilatus PC-6 Turbo Porter. The runway is 527 meters long and 30 meters wide and at the end of the runway if a cliff. Apart from passenger flights, this airport is used to carry most of the building materials and materials for the hotels and locals of the region. The airport sees cargo to the village be transported via planes as there are no roads to the villages.

The direction of the wind is changing with the time which affects the take-off and landing.  Staring from the north-east in the morning, the wind changes its direction to the south-west and as the wind is often strong in the morning, the airport frequently closes from late to mid-morning. The flights are generally scheduled to early morning and the airport is closed without any warning when the visibility gets affected. So even if the airport is open all year round, the flights are generally closed during the monsoon. The serious issue in the airport is there is no safe go-ground in this airport so if one misses the runway, there is a small chance that one will likely survive. The high terrain immediately after the runway makes the airport the riskiest to land at.

Every year a lot of people die while summiting the Everest but the threat starts before the trek begins as the plane prepares to land. There are several ways to avoid this unprecedented accident but this is a rather shorter route compared to other trek routes.

The airports at higher altitude always posses risks due to low air pressure as it adversely affects the handling of the airplane. With pressure comes shear wind and at an altitude of 2845 meters,   surroundings are a threat as well. Lukla comprises all these risks. It is not only the physical threats but the problems caused to the pilots as well at such a high altitude. If not adapted to the environment, there is a likely chance that the pilot will be hit with altitude sickness.

The runway is short and the greater threat is the terrain following the short runway from all the sides. At one end of the airport is a wall and on the other side is a steep drop into the valley below. So a little miscalculation while landing has a great deal with the life of passengers on-board.

At such high altitudes, air density is significantly low and at such low air density, it requires more amount of power for the aircraft engines. This reduces the life and the airplane might not get the desired life. As the air density is lower, it offers lower resistance which makes it harder for the plane while landing. Higher the altitudes, longer is runway is required but such is not the case at Lukla airport. While most of the runways are as long as 5000-8000 feet, the Lukla airport’s runway is only 1729 feet. But even with low air resistance and shorter runway, the Lukla airport has an uphill gradient of 12% which helps to land.

Lukla is surrounded by mountains by all the sides, so if a plane fails to make a touchdown, there is no going-around and trying to land again. Considering this, this airport only allows small winged planes and helicopters to land. With such adverse conditions, it takes a lot of courage to fly to the world’s most dangerous airport.

And unpredictable weather in the Himalayas adds to the woes of the airport. Mist, fog, rainstorms, and snow are sudden and these unprecedented factors have added to the death tolls in this airport. Weather can be different while leaving for Lukla and arriving at Lukla. There is frequent contact with the stations at Kathmandu and Lukla as planes might have to turn around and return to the capital at any instance. The climate at the Himalayas gets cloudy during the day so the flights are generally scheduled for early morning. The airport sees flights getting canceled very often.

Pilots flying to the Lukla airport requires special experience as it sees fatal accidents all year round. The Civil Aviation Authority of Nepal has set high standards and only experienced pilots who have completed at least 100 short takeoffs and landing (STOL) missions can fly to the region. Adding to this, the pilot must have one year of STOL experience in Nepal and must have completed 10 missions into Lukla with a certified instructor pilot. Only if these criteria are met, one is permitted to land on the most dangerous airport in the world.

Lukla airport has seen a lot of fatal accidents since the very beginning. Incidents started back on October 15, 1973, when a Nepal Airlines Twin Otter 300 was damaged beyond repair while landing. The most fatal accident dates back in 2008 when yeti Airlines twin otter crashed into the mountain when the pilot lost visual contact in heavy fog during the final approach. 18 people on board including 16 passengers and two out of three crew members lost their lives and the pilot was the sole survivor.  The last accident was on 14th April 2019, when a Summit air Turbolet with no passengers on board crashed with a Manag Air Eurocopter AS helicopter. The plane crashed into the helipad 30-50 meters from the runway. Both plane and the helicopter were destroyed. Three were killed in the incident

On October 1, 2004, Sita Air Dornier incurred a collapse of its nose gear and slid along the runway blocking the runway after it had come to rest. On 12 October 2010, a Sita Air Dornier lost its braking control but thanks to the heroics of the pilot, it struck the wall-end if the runway during landing saving all the passengers and crew on board. There have been several other accidents in this airport but thanks to the experienced pilots, death tolls have not reached as much as one would expect to given the circumstances while landing at Lukla airport.

The pilots flying in this route have been heaped with praise as it is not every pilot’s cup of cake to successfully fly in these adverse conditions. It is believed that the one who can fly in this route can fly in any corner of the world.

Looking at the accidents that might happen in the forthcoming days, there is a technical study underway to asses the feasibility to extend the runway. There will be a lot of problems while entending. However, a 100 feet extension proposal is put forward. A new helipad is being constructed which will increase the passenger capacity.