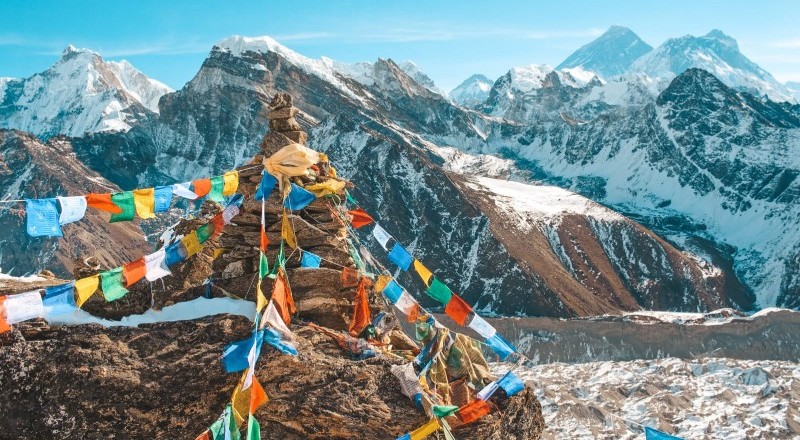 Top 10 places to visit in Nepal

Lumbini is the birthplace of Lord Buddha and is touted as one of the most religious places for Buddhist pilgrims. Siddhartha Gautam was born in 563 BCE who later found enlightenment through years of meditation. Lumbini has numerous temples ranging from a different era and the archeological masterclass entices the visitors coming to this holy place. Queen Mayadevi gave birth to Gautam Buddha, which was later converted into a temple bearing the queen’s name. This was the place where Lord Buddha took the first seven steps and the impression of those seven steps are still kept intact inside the temple. Apart from the old monasteries, there have been several new monasteries inside the premises made by different countries like Japan, Korea, etc. the Ashoka Pillar commemorates the arrival of King Ashoka which was excavated in 1896 and the inscription supports the fact that Gautam Buddha was born here. Lumbini is almost 8-10 hours drive from the capital while the flight shall take no more than 30 minutes.

Janakpur carries immense religious importance in the Hindu religion as Sita, a Hindu goddess was born in here. Janakpur is located in the central Terai of Nepal which was once the capital of the millennia-old kingdom of Mithila. Maithili culture still resides in Janakpur and the culture has remained intact ever since a long time. Janak was the king of Mithila who found Sita while plowing the field. Later, Lord Ram was married to Sita after he completed the challenge put forward by King Janak. Every day on the occasion of Ram Navami, hundreds of devotees are flooded in Janaki temple and the Ram temple located in the skirts of Janakpur. Janaki Mandir is the largest temple of Nepal and Janakpur has more than 100 sacred pools scattered all over the city. This city sees a lot of pilgrims every day and the sweet scent of incense wakes up this city. As the day bodes, hotter it gets during summer but the evening becomes serene with all the bells ringing and hymns all over the city. This city has the only railway in the country.

The journey to Rara is into the wilderness to reward yourself with an exotic view of the biggest lake in the country. This lake is also known as the ‘Queen of Lakes’ because of its beauty. The journey is through the woods most of the time with small settlements of remote Karnali area. Even though the mountains are not intact throughout the journey, the verdant pine and oak forests are lush. We might as well encounter some wild animals like Ghoral, Thar, Himalayan Black Bear, Musk Deer, and even red panda if you are the luckiest. This forest shelters 200 species of birds as well. We can walk through nature and get to know the lifestyle of remote villages of Nepal. The lush view of Rara is exhilarating. The mystical Rara changes its color to blue, yellow, and green during different times of the day. The view from Murma Top is equally lush as we will experience being surrounded by the mountains from all the side and blue Rara at the bottom.

Chitwan National Park is the oldest National Park in the country established in 1973. The National Park was enlisted in the UNESCO world heritage site in 1984 AD. The National Park covers a 952.63 square km area and is home to much-endangered flora and fauna. Sal trees cover 70 % of the national park area while other smaller flowering trees and shrubs cover the remaining are of the forests. Grasslands also cover a majority portion of the forests and some of the world’s tallest grasses like elephant grass are also abundantly found. The National Park accounts for more than 700 species of wildlife and the number of insects species.  More than 17 species of snakes are found and 113 species of fishes and crocodiles are found in the Narayani-Rapti river system. The national park is home to 68 mammal species including Bengal tiger.One-horned Rhino is another endangered species of mammal found in the national park. Apart from the flora and fauna,this region is good to stroll around the Tharu community and observe their culture as well.

Everest Region is one of the most trekked journeys inside the country. Every year, thousands of tourists visit the Everest region to get lost in the serenity of nature and test their fortitude.And even if one can not make it to the top of  Everest, the way is full of jaw-dropping scenarios that keep the excitement intact throughout the journey. Located in the north-east part of Nepal,this region is not only famous for the world’s highest peak but also the endangered flora and fauna. The Sagarmatha National Park is home to many rare animals like the red panda, snow leopard, etc.Sherpa resides in the Everest region and there are monasteries in this region that was once the center of Buddhism. Tengboche monastery carries immense historical and religious importance in the region.

The ambiance Pokhara offers makes one forget all the resents in life and enjoy the tranquility amid the bustling city. Also called the city of lakes, Pokhara has a lot of places where one could relish the calmness. Pokhara is a hub to different travel destination of the country. Pokhara offers a magnificent view of lush mountains like Machhapuchre, Annapurna, and Dhaulagiri. From the first sunrise to sunset, everything looks beautiful in this city. And not to forget, the night-life gets even exciting with all the restaurants and pubs opening past midnight.  Phewa lake is a popular lake in the city which is lined with deluxe hotels and the city is the best place to replenish after coming from a weary trek. There are several adventure options like bungee, zip-flying, paragliding, etc. which keep your serotonin intact throughout the journey.

Kathmandu valley comprises Kathmandu, Bhaktapur and Lalitpur, three of the culturally coveted cities in the country. The valley has at least 130 monuments including pilgrimage sites for Hindus and Buddhists. There are altogether seven sites enlisted in UNESCO World Heritage Sites within the valley. Kathmandu valley has most of the important offices in the country and is a popular destination for tourists who wish to see unique ancient architecture. Pasupatinath temple is one of the most religious temples among Hindus while Swyambhunath and Boudhanath carry the religious importance of Buddhism. Kathmandu, Bhaktapur, and Lalitpur have their own Durbar Square where the king resided previously. Earthquakes cause destruction to those structures to a greater extent but renovations have started and the structures have started to find their authentic stature. Apart from the monuments, the valley is enriched with cultures. Several Jatras are occurring every month in the valley. Newars are indigenous of the valley who have laid the civilization in the valley. It is believed that Kathmandu valley was once nothing but a lake which was cut by Manjushree to form a valley and drain all the water to establish a habitable land.

Lying in the north-western part of Nepal, Annapurna is galore to the gleaming mountains and lush landscapes. Annapurna region comprises several trekking destinations within the circuit. Passing over the plateau and walking through the moraines this classic trek leads the trekkers high into the Himalayas. Starting from Pokhara, the Annapurna region covers destinations like Muktinath, Thorong La Pass, Jomsom, Upper Mustang, etc. The mountains look so close upfront, one might wonder if they could reach out to the mountains. Walking in the region, one will plunge deep into the gorge and trek high to the passes and passes and all these ups and downs make the Annapurna Region one of the best places to visit in Nepal.

Shey-Phoksundo National Park is the largest National Park covering an area of 3555 square kilometers. Established in 1984, the National Park covers the area of Dolpa and Mugu district. The area is enriched with bio-diversity and offers a spectacular view of lush landscapes. The rare animals like snow leopard, musk deer, blue sheep, etc are found in this region. The National Park is home to 6 reptiles, 29 species of butterfly and over 200 species of birds. Phoksundo Lake is touted as the most beautiful lake in the country as one is surely enticed by the serenity of the lake. The majestic lake is 5.15 km long and 800 m wide.

The eastern-Nepal has equally serene places to visit including the Kanchenguna trekking, the tea-garden of Illam, the Pathibhara temple of Taplejung and many more. There are many peaks in this region which can be summited with proper climbing gear. Eastern Nepal is enriched with both cultural and biodiversity. The hilly region is mostly inhabited by Rai and Limbu people which offers cultural diversity. Mt. Kanchenjunga (8586 m) is seen as vivid from the Kanchenjunga North Base Camp.