The Naya Kanga Peak Climbing Expedition or simply known as the Ganga Chuli Expedition is a comparatively easy peak climbing trip to the 5584 meters tall peak. Though this is not more than a mountaineering expedition, this hike offers not only the views of the high alps of the Langtang Region but also explores the way of life of the Tamang people of this community alongside their hospitality and other life struggles.

Similar to the Langtang Valley Trek, this trip also begins with a long drive to the village of Syabrubesi through the narrow bends and rough roads of Dhunche. Following our arrival at Syabrubesi, our trails take us towards the Lama Hotel. Our arrival at the hotel comes after walking for almost 6 hours. Though it's that long, walking alongside beautiful waterfalls, the Langtang River, views of the Ganesh and Manaslu peaks, it becomes quite easy. Next up is the Langtang Village, which was entirely destroyed during the 2015 earthquake. Don't worry, this village is now shifted to a safer place 100 meters away from where it previously was. Another day's trek marks our arrival at the Kyanjin Gompa which stays as the home to the largest Mani wall in Nepal. Relish in the views of the Kyanjin RI, Tserko RI, Kinshung, and such other peaks. Oh, and don't forget to visit the Yak Cheese factory while here. As a rehearsal to our climb a few days later, we'll be summiting the 500 meters tall Tserko RI. Enjoy!

Following our exploration of the Kyanjin Gompa, parade towards the settlement of Nyengang Kharka. From here, it's an easy trek to the last stop before our summit, the Naya Kanga High Camp. Within a three days buffer period, we'll head towards the top of the Naya Kanga Peak and mark our victory. Plunge back to the high camp and then towards the Nyengang Kharkha. The trails follow the same path we used during the start of our trek towards the Lama Hotel followed by Syabrubesi. A long drive to Kathmandu marks an end to our peak climbing expedition.

Are you ready to bombard your life with a little bit of adrenaline rush?

Itinerary Show all Hide all

Set foot at the Tribhuvan International Airport where our representative will transfer you to your hotel. Settle in and freshen up prior to meeting up with the guide and discussing about the upcoming trek. And, don’t forget to try out your first ever typical Nepali cuisine.

Cover 122 kilometers via a 7 hours long drive to the village of Syabrubesi via Dhunche. Drive through the concrete black topped roads till Trishuli Bazaar. Forward from there sees us on rough roads and narrow bends to Dhunche and then to Syabrubesi. En-route, enjoy the first views of the Ganesh and the Manaslu Peaks.

A peaceful day at Syabrubesi far from the hustle and bustle of the city. March forwards and across a suspension bridge over the Bhote Koshi River to arrive at Doman. An uphill stretch from here sees us at Pahiro and a short walk stops at Bamboo. Across the bamboo forest and further uphill hike makes way for Lower Rimche and eventually, Upper Rimche. An easy parade from here marks our entry at the Lama Hotel. Along the road, enjoy the Langtang River and a beautiful waterfall.

Soar through a lush rhododendron forest to get to Ghoda Tabela. A flat walk at the beginning and then an uphill hike sees us at Thangshyap. Further ascend completes our hike to the Langtang Village. This village saw complete destruction in the 2015 earthquake. However, there’s nothing to worry about now as just 100 meters away at a safer place, a new Langtang Village has been formed. While at Langtang, enjoy the views of the Langtang Lirung (7227 meters).

The trek to Kyanjin Gompa from Langtang Lirung is as easy as falling off a log. No sweat there, right? Kyanjin Gompa is home to the largest Mani wall in the country.  While here, explore the Gompa and also relish in the views of the Kyanjin RI, Tserko RI, Kinshung, and such other peaks. Don’t forget to make a visit to the Yak cheese factory at this village.

Rise early and hike up to the top of the Tserko RI at 5000 meters. Graze past yak pastures and ascend steeply to complete the summit. Delight in the views of the Langtang and Manaslu peaks from the top. Get back down and explore the rest of the Kyanjin Gompa. During the way, we’ll have options to either explore the valley or hike to the Langtang Lirung Glacier or even a lake nearby.

Start with a downhill walk towards the Langtang River. Get across a suspension bridge to ascend via the juniper shrubs and scarce vegetation to Nyengang Kharka. Savor in the views of the Langtang Lirung and the Langtang RI en-route.

Parade uphill along the dusty, rocky trails to arrive at the Nyengang High Camp. Take in the views of the Kibgyu RI, Ganchenpo, and such other peaks from the high camp. Also, don't forget to appreciate the Tserko RI peak we summited just a few days back.

We'll take a day's rest prior to commencing our climbing expedition. Leave the high camp early on to hike steeply along the slippery rocky and icy trails to climb up to the Naya Kanga peak at 5584 meters. While climbing the mountain, we'll be using ropes, ladders, and crampons. From the top, the panorama of the whole Langtang Region looks splendid. Plummet back to the high camp to mark our victory. Then, drop back down to the Nyengang Kharka the following day.

Get out of the village of Nyengang Kharka with a downhill walk. Across a suspension bridge over the Langtang River and then an ascent sees us at Kyanjin Gompa.

An easy hike downhill takes us to the Langtang Village. Another downhill walk sees us at Thangshyap and eventually at Ghoda Tabela. Yet another descent sees us at the Lama Hotel.

Trek back to Syabrubesi (1467 meters)

Follow the same rugged trails back to Rimche, both the upper and lower villages. Then, a downhill walk through the bamboo forest sees us at Pahiro. Prior to stopping at Syabrubesi, we also need to get past the village of Doman. Enjoy your last day at the Langtang Region.

Drive back to Kathmandu (1440 meters)

Get the last look at the Langtang Lirung and bid farewell to them! Early drive along the Trishuli River via Dhunche will see us back at the capital city of Nepal, Kathmandu.

This day marks the official end of your trek! If you have plans to stay and explore Nepal more, we can arrange scenic tailor-made trips for you. However, for those of you having to travel back, we will arrange your travel to the airport and wish you a happy journey ahead. 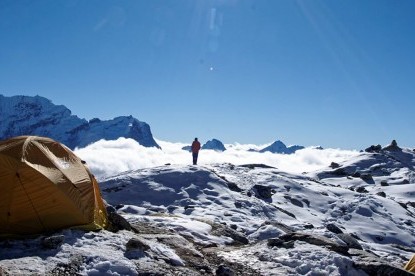 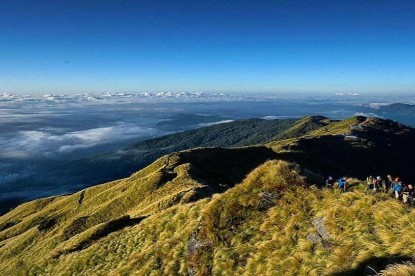 Are you ready to get away from the hustle and bustle of the city? Well, then Mardi Himal T...